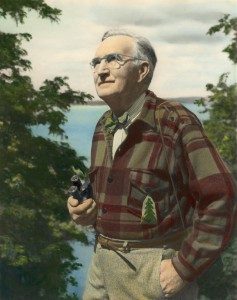 The kind-faced gentleman pictured here was an early genius in mass media. Wakelin McNeel, "Ranger Mac,” reached an estimated 700,000 young people in Wisconsin with his Wisconsin Public Radio program, “Afield With Ranger Mac.” The program ran between 1933-54, reaching out to students in one-room school houses and big city schools alike with colorful but knowledge-filled messages about conservation and nature. The mere mention of “Ranger Mac” evokes warm memories among those who looked forward to his program each week.

If you’re up for a bit of adventure, you don’t have to wait for warmer weather to go hiking. Whether it’s the dead of winter or you’re venturing up into the higher, colder altitudes, if you want to hike in the cold, you need to be prepared. It can be just as dangerous to hike…

Tracking Animals in Your Own Backyard!

There’s so much for kids to explore in nature, from bird watching to fossil hunting. The best part is that you don’t have to travel to a national park or exotic location to experience nature’s beauty. Discovering what lives and thrives in nature can be as easy as stepping out into your own backyard or…

Hiking in the desert can be a beautiful experience that creates memories that will last a lifetime. However, if you’re not adequately prepared for the harsher conditions of the desert, then you’ll get an entirely different set of memories. The desert is as dangerous as it is beautiful if you’re not prepared, and there are…